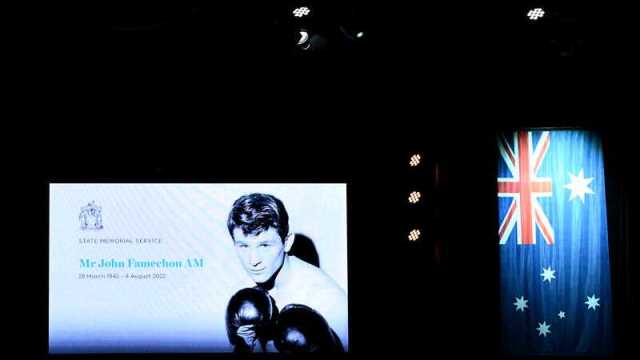 In the arena where it all began six decades ago, Johnny Famechon has been honoured by a crowd that cheered and applauded him just as they had during one of the finest careers in Australian boxing.

But rarely in his life as a sporting icon did the former world champion, who died in August, receive the depth of love and respect as at Tuesday’s State Memorial Service at Melbourne’s Festival Hall.

Mourners, led by his widow Glenys and his children Danielle and Paul, recalled the wins, the losses, the joys and tragedy of a life unanimously acclaimed as one well-lived.

In his 51 Festival Hall bouts, Famechon won state, national and Commonwealth titles before beating Cuban-born Jose Legra to claim the featherweight world championship at the Royal Albert Hall in January, 1969.

The WBC champion makes his second defence of his featherweight crown, halting Fighting Harada in their high-stakes rematch.

As the Service celebrant Bruce Eva said: “This is Fammo’s house.”

“Fammo” defended his world crown eight times in the 16 months after winning it, most notably against the Japanese boxer Fighting Harada, before losing his crown to Mexico’s Vicente Saldivar in Rome in 1970.

After a relatively sedate 20 years of retirement and soon after meeting his wife-to-be, he suffered his most severe blow when struck by a car while jogging, suffering brain damage and a stroke.

Glenys Famechon told of “living a dream” with her husband and of joining him in his recovery.

“Our life together was the most wonderful love story,” she said. “I was swept off my feet by this wonderful man.”

Despite being confined to a wheelchair after the accident in 1991, Famechon maintained an irrepressible sense of humour and self-belief that was acknowledged at his memorial service.

“His ambition was to walk me down the aisle when we got married in 1997 and he did it,” Glenys Famechon said.

Famechon’s son Paul praised his father as “a beautiful man”.

“What a great privilege to be his son,” he said.

His daughter Danielle spoke of the determination that wasn’t confined to the boxing ring.

“He just loved boxing and got on with the job, it was the same in life,” she said.

“We want everyone to celebrate his wonderful life.”

“The thing that John wanted everyone to see was that he had no self-pity,” said Michael.

“He never stopped smiling, always humble and he never looked for sympathy.”

Called Jean-Pierre Famechon, he was the son of a European boxing champion and a nephew of three French national champions, and he was born in Paris during the final weeks of World War II, and arrived in Melbourne as a five-year-old.

He was Australia’s third boxing world champion after Jimmy Carruthers and great friend Lionel Rose, who in 2011 was also farewelled at Festival Hall.