‘Your mother’s a bitch’: Near riot as Devin Haney taunts George Kambosos at title bout weigh-in 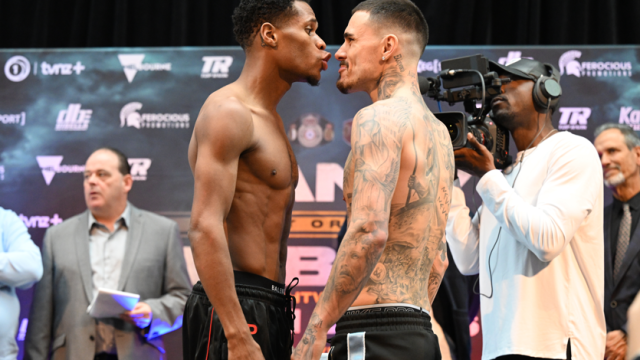 Unlike before his first fight with Haney in June, Kambosos comfortably made weight at 134.08 pounds, easily under the 135-pound limit, before mayhem broke out at Rod Laver Arena on Saturday.

Kambosos and Haney had to be separated and the two entourages almost came to blows in ugly scenes that promoter Lou DiBella conceded were “a little out of control”.

Foul-mouthed Haney supporters taunted the Kambosos camp with expletive-laden taunts including “Your mother’s a bitch” while the US fighter’s father, Bill, stoked the fire with a crude middle-finger gesture.

DiBella also threatened to eject the world champion’s travelling jeweller for aggressive behaviour towards a security guard and “trying to start a fight”.

‘Nothing staged … that was real’

“You don’t want to see that. It’s very easy to go from that to something dangerous,” DiBella said.

“There was nothing staged about that at all. That was real.

“That being said, this is a fight, a prize fight, and there’s a lot of emotion, a lot of adrenaline here.

“So it’s not shocking and ultimately no one got hurt, thank God.”

DiBella said officials would have “security everywhere to make sure nothing like that happens again” on Sunday.

“That being said, I think there’s going to be a lot more passion in this fight. I think we’ll see a better fight.

“And, look, I think George is ready to fight this time. I don’t think he was last time but he’s ready this time.”

Kambosos (20-1, 10KO) initially missed weight on the eve of his first stoush with Haney (28-0, 15KO) before losing a unanimous points decision at Marvel Stadium.

He is a different beast entering the return bout as he bids to become the first Australian in boxing’s 18-year, four-belt era to unify a weight division by stripping Haney of his IBF, WBA, WBO and WBC straps.

“I’m ripped and ready,” Kambosos said. “We put in the work. That’s a statement right there. We’ll make a statement tomorrow.”

“I haven’t shown too much in this camp but I’m gonna show it all tomorrow.

“We are ready and whatever he brings ain’t enough.”

Haney hit the scales at a slightly heavier 134.81 pounds, with DiBella predicting a show-stopper after Kambosos was completely outboxed in suffering the first loss of his career in June.

“Will it matter? I don’t know. Devin is a defensive genius but George knows what he has to do.”

But the 29-year-old has since ruled out such a drastic move.

“Three world title fights in a row, I’m a role model to the world of boxing,” Kambosos said.

The post ‘Your mother’s a bitch’: Near riot as Devin Haney taunts George Kambosos at title bout weigh-in appeared first on The New Daily.